Motorcycle and automobile rally “Russian Battlefield’s” will be held from August 22 to 30, 2020

In the year of the 75th anniversary of the Victory in the Second World War, the rally “Russian Battlefield’s” turned to historical events that served as the foundation for the Victory of 1945. Participants will visit the places where the Russian spirit was tempered and a Russian warrior was formed, fighting for his Fatherland: three Battlefields of Russia: Kulikovo, Borodino, Prokhorovka; military historical museums and memorials: Victory Park and Victory Museum, Glory Frontier and Lenin-Snegirv Military History Museum, Museum of Military Glory in Mozhaisk, museum-diorama “Great standing on the Ugra River,” monument to the Great Standing on the Ugra, the historical and memorial museum “Command Post of the Central Front,” the dugout of Marshal Rokossovsky, the historical and cultural center “Korennaya Pustyn” the memorial museum of the First Calvary Army in Velikomikhailovka, memorial to the battle on the Vozha River, Maiden Field, Kolomna Cathedral Square, Kolomna Kremlin cultural and historical complex Kolomna Kremlin; monasteries and churches of the Russian Orthodox Church associated with the military history of Russia: the Church of St. George the Victorious on Poklonnaya Gora, the Spaso-Borodinsky Monastery, the Vvedenskaya Optina Pustyn Monastery, the Kurskaya Pustyn Root Monastery, the Belfry and the Church of the Holy Apostles Peter and Paul in Prokhorovka, Trinity Holkovsky Monastery, Kostomarovsky Spassky monastery, Church of St.Sergius Radonezhsky on Kulikovo Field, Cathedral Assumption Cathedral in Kolomna and others historical and cultural places of Russian Land. 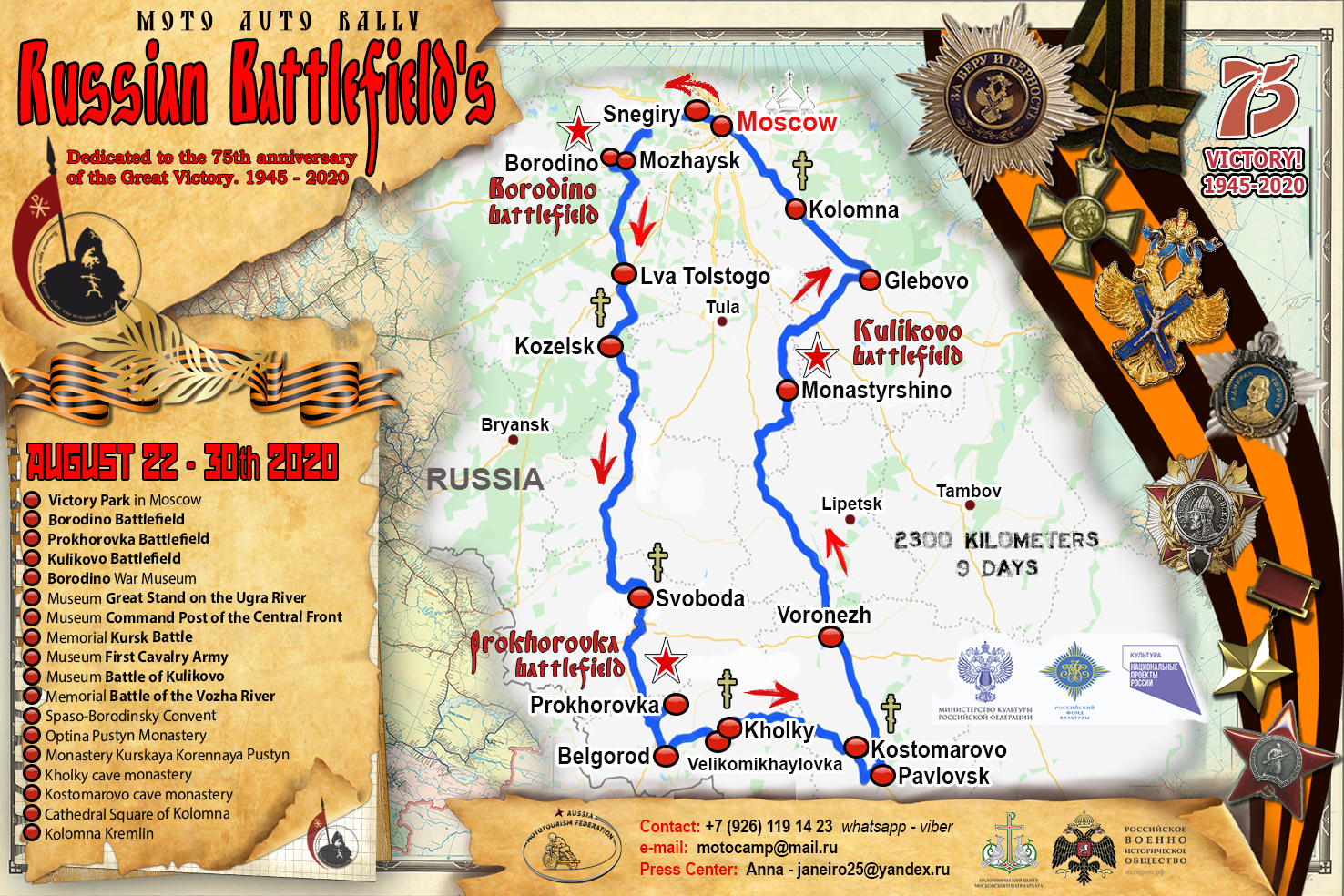 The international part of the project “Russian Battlefield’s”, calling “Kosovo Polje” will be held on September 22-28, 2020 along the roads of Serbia by the route: Belgrade – Kragujevac – Jagodina – Chupria – Krushevac – Novi Pazar – Kosovska Mitrovica – Gazimestan – Gracanica – Prilepnica – Klenike – Vranje – Niš – Bela Palanka – Zaechar – Negotin – Prahovo – Golubac – Požarevac – Pancevo – Belgrade. The participants of the rally will visit significant places, memorials of Soviet and Serbian soldiers who fell for the liberation of Serbia and its capital Belgrade during the World War II. The information about moto-auto rally “Kosovo Polje” and terms of participation on the site: http://gagarinmoto.ru/en_US

Anyone who is interested in Russian history, culture and traditions can join the cultural and historical routes of the project “Russian Battlefield’s”

God Keep You on Your Road!